The U.S. Bureau of Reclamation has released a long-awaited study that identifies future climate and hydrology projections and outlines gaps between water supplies and projected urban and agricultural demands in the American River Basin.

The study, which was developed in partnership with local water providers, including the Regional Water Authority, describes regional vulnerabilities and strategies for adaptation designed to address climate vulnerabilities in the American River watershed, which stretches from Sacramento to the foothills.

“The American River Basin Study is one of the most sophisticated evaluations of climate change impacts on water supplies in California to date, using the best available science and latest modeling tools to forecast potential impacts on water supply, water quality, and critical habitat within the Basin,” said Andy Fecko, General Manager of the Placer County Water Agency, which served as lead local agency. “This level of analysis is needed to fully understand the impacts of climate change and encourage a coordinated effort to address the unique vulnerabilities of our region.”

Significant increases in temperature of 4 to 7 degrees (F) by the year 2085. The most remarkable change is seen in the upper watershed, which will significantly impact snowpack, our largest storage reservoir. Precipitation will fall more as rain and less as snow, resulting in runoff peaking 35 days earlier by the end of the century—in February through March rather than in May—with significant impacts on the current water management system and environment of the American River, including: 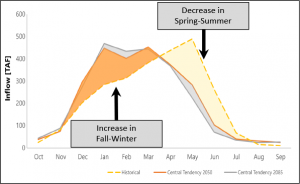 The need for water, even with conservation measures in place, will grow by 7 percent to 8 percent due to more prolonged and hotter summers. 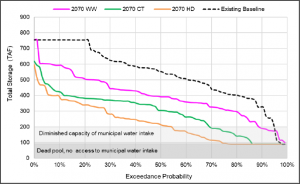 The study partners evaluated potential strategies to address climate challenges, improve water supply reliability, and enhance Reclamation’s flexibility in operating Folsom Reservoir to meet flow and water quality standards in the Delta and ensure environmental protection. Each strategy addresses different sets of climate impacts in the watershed because no one adaptation portfolio can address all of the identified vulnerabilities.

“The adaptation strategies outlined in the Basin Study are consistent with state and federal plans and initiatives for adapting to climate change,” Fecko said, noting Governor Newsom’s plan, “California’s Water Supply Strategy: Adapting to a Hotter, Drier Future.” “The Basin Study outlines an array of solutions that can be implemented at the local level and create mutual benefits for Reclamation and statewide water managers.”

In addition, the Basin Study identified climate change’s projected impact on forest health and wildfire as a potentially catastrophic vulnerability to the American River region’s natural and built water supply infrastructure. “While not identified as an adaption strategy, we know that active forest management is important to clean and reliable water supplies,” Fecko said.

Regional water managers are currently evaluating and pursuing these strategies to maintain the region’s economy, environment, and quality of life.

The American River Basin Study is part of Reclamation’s WaterSMART Program. The full report is available at https://www.usbr.gov/watersmart/bsp/arbs/.